Forty-seven days, eight hours and 25 minutes. That’s how long it took Team Antigua Island Girls to row 3,000 nautical miles across the Atlantic Ocean from La Gomera in the Canary Islands to Nelson’s Dockyard in Antigua. 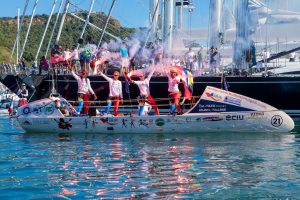 When they arrived home on Monday, January 28, 2019, they etched their names in history, becoming, not just the first all-woman team from the Caribbean to compete in the Talisker Whisky Atlantic Challenge, but also the first all-black team to row across the Atlantic Ocean.

The women—Christal Clashing, Elvira Bell, Kevinia Francis and Samara Emmanuel—arrived to a hero’s welcome. Dozens of boats went out to meet them and to escort them to the finish line. A helicopter and a small plane circled overhead. Cruise ships and luxury yachts blared their horns, and hundreds of flag-waving people spread across the hills at Shirley Heights and Fort Berkley. On the quad inside the dockyard bearing the name of a colonizer, Horatio Nelson, thousands more from all demographics hooted, hollered and cried openly as four black Antiguan women rewrote history.

Their journey, just about a year in the making from training to completion, amplified girl power, united the nation around a single issue, and raised awareness and funds for Cottage of Hope, a group home for girls.

Their story, they have noted, is more than almost 50 days at sea and a world record. It holds experiences, epiphanies and deeply intense and personal victories. It also sealed a lifetime bond and brought positive exposure to Antigua and Barbuda.

Some highlights include weather that was safe but unconducive to a team aiming to break a record of time; crippling seasickness in the early days; equipment failure; coexisting with sea life; being humbled by their place in the universe; communing with the ancestors; testing their mettle; and the jubilation on sighting the glow of the land mass they call home.

There was also a dreadful near capsize on a pitch-dark night just three days before the team arrived home. It happened when Christal and Kevinia were on shift. The boat went 90 degrees perpendicular before slamming back down. The incident knocked out the auto helm, pitched the team around, and resulted in two oars breaking.

The women tell the story with humor now safely on land, but admit that it was the most alarming time of their journey. “I had three reactions,” Christal said. “The first was we’ve trained for this. The second was because we trained for this, we knew how hard it really was going to be to have to hand-steer, and the third was being on steering is so hard, you must be attentive 100 percent of the time and the responsibility of keeping us on course was dreaded.” 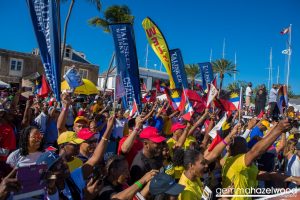 The team recovered relatively quickly, and got back on course, but at that point, 44 days at sea, they were ready for terra firma.  Arriving to a half-day holiday in their honor and a crowd comprising many, from politician to schoolchild, made the homecoming just that much more heartwarming.

“We knew a lot people would come, but we didn’t expect that many people. The cheers and the roars of the crowd was something special to experience,” Samara said.

That arrival was the culmination of a whirlwind preparation of just nine months—a fact that drew incredulity from people who wondered and worried about a team of landlubbers and a single seafarer in the midst.

When they offered themselves up for the challenge, each woman was looking for adventure. They wanted to test themselves and they wanted the experience. That they would voluntarily traverse the route of the Trans-Atlantic Slave Trade that brought their forebears to the Americas as chattel was a major factor.

“When I took this on, I was looking for an adventure. I wanted that flare in my hand as that iconic image, and what I liked about it was that we had a chance to retrace the slave trade route, and to do something historic was a great motivator for me. It combined my love of history, love of adventure, and my love of Antigua,” Christal said.

The others called the crossing cathartic, solemn, cleansing even—and, to a woman, felt the presence of the ancestors recently and long departed—acknowledged by them in numerous ways, including Elvira’s daily mantra of “I see you, I feel you, I respect you.”

That there are lessons to take from this historic feat whether man, woman, boy or girl is obvious. Asked specifically their message to young girls, it was about hope, strength, commitment, and self-assuredness.

Elvira wants girls to know they “are the essence of life.”  Christal wants them to have the audacity to chase big, scary dreams “because that’s where life begins.” Kevinia wants them to match commitment and action to their dreams, and Samara wants them to know the awesome power in self-belief.

“Believe in yourself even when others don’t believe in you,” Samara said, using her story as an example. “I was a teen mom at 16. I didn’t finish my secondary education, but I was able to become the first female captain at 21, and now I am part of an amazing team who are the first black people to row across the Atlantic and all that came from believing in myself.”

And while they are in the history books, Team Antigua Island Girls is anything but history. They plan to remain actively involved in raising funds and awareness for issues facing women and girls, including the charity for which they rowed, Cottage of Hope, a home for abused, abandoned, orphaned and otherwise underserved girls.

They women have forged a bond that transcends teammates into sisterhood. And these intrepid women are contemplating more adventures—solo runs and as a unit.

Fiercely competitive, Kevinia, a lifelong athlete, reminds that history and all in the bag—the team was thirteenth in a fleet of 28 boats—they still have a hankering to prove, mostly to themselves, that they can be more competitive in the race. It’s a hint that it should surprise no one if, a few years on, they are back on the row again.